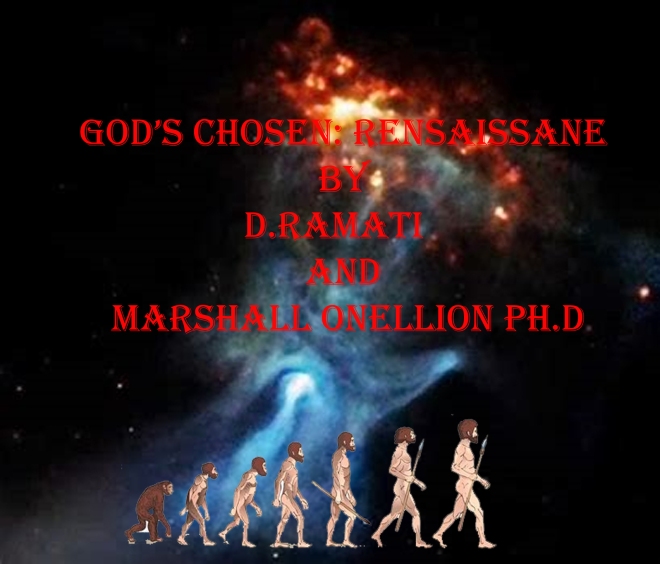 Where were you when the lights went on?  Listen to the interview by clicking the link below.

Where were You when the Lights Went On?

An excerpt from the exciting 2nd edition by M. Onellion and D. Ramati

In this and the two forthcoming books of our trilogy, we present the tale of Jews and Judaism, an epic tale of people surviving against overwhelming odds. We begin at both the beginning and end of our story with cosmology- creation stories- of 21st century Physics, Christianity, Islam, and Judaism. Taking 21st century Physics cosmology as correct, Jews and Judaism deduced the correct creation story which is found in Kabbalah. The word Kabbalah means ‘the receiving’ and refers to receiving knowledge about G_d. Kabbalah includes a written part that is almost 1,000 years ago and a more important oral tradition that is over 3,500 years old.  Jews retained their correct creation story while coping with larger, often hostile, Christian and Muslim civilizations that insisted on incorrect creation stories and viewed dissent as heresy.

In the Book I chapters, brimming with stories, we lay out what all of us owe Jews and Judaism from the earliest prophets, Abraham & Sarah, to the mid-18th century.  For example, many of us know that Jews or people of Jewish ancestry have received about 30% of all Nobel Prizes in science & economics, although Jews are only 0.25% of humanity. Fewer know that Jews have exhibited extraordinary literacy and numeracy compared to their Christian (earlier: Roman) and Muslim neighbors for over 1,800 years, but did you know about the Jewish Pirates, their part played in the voyages of discovery, and the part they played in our American Revolution?  Open the pages and enjoy this action pact historical adventure.

To the Brotherhood from Aaron Ben Herut, written as I take pen in hand in this year 5500 of our Hebrew calendar.
Dear Brothers:
I am grateful for your trust in electing me to continue the work my father of blessed memory in leading this Holy Brotherhood of the Jews.
As a first action undertaking this Holy Commission I am calling for a shift in our goals, a shift, which I believe, will make us even more capable of protecting our people during this century of change. To reflect this change I have taken the code name of “Son of Herut” which, as you know, means Son of Liberty.

Our age will be led by men of flesh and blood, men who have the strength and the foresight to seize the opportunities that are about to present themselves.
Until now, our people were dependent of the Court Jews, men who were so useful to Kings and Princes that they could influence the rulers to spare our people from the worst atrocities that have befallen us since the expulsion from Spain. Now, with the dawn comes a new era: the era of the rise of the common man.

To this end, I am asking you to continue to finance the Kings in their endless wars while keeping in mind the three stars that beckon most strongly: The North American Colonies, England, and France. In all three, the Freemasons have become a guiding light for the aristocracy and more importantly the Free Thinkers among the gentiles. In every land with the exception of the German principalities, Jews are welcomed as social equals into this interesting brotherhood. They have a great affinity for Hebrew symbols and are totally open to discussion. There is a rumbling thunder in the distance, the thunder of revolution, freedom, liberty equality, and we must be a part of this great enterprise.

While in the past we have lived under the fickle suffrage of monarchs, we must now work to live protected under the law. The age of Kings is drawing to a close, and if you listen well you can hear the birth pangs of the dawning of the age of Republics.
The first order of business is to send the best and most influential members of the Brotherhood to join the Freemason lodges, which are springing up all over Europe and the colonies. Meet and influence the future leaders.

I am wishing you success in this and will expect progress reports as this project goes forward.
Blessings,
Aaron Ben Herut

Where were you when the lights went on? tells the epic saga of Jews and Judaism. We learn how much all of us owe this religion and these peoples. In chapter one, we reveal the remarkable similarity between 21st century Physics cosmology and the Jewish creation story detailed in Kabbalah, Jewish mysticism. Jews persisted in believing their cosmology, and have been brilliantly vindicated by astronomy and astrophysics discoveries in the last century. By contrast, Christian and Muslim creation stories possess fatal flaws and stand discredited by scientific discoveries from the 1920s to today.

Using stories, chapters Two through Nine spell out many of the contributions by Jews and Judaism between the prophet Noah and the American Revolution that continue to enrich and affect our civilization. Jews adopted valuing life (l’chaim!, to life!) when surrounding civilizations practiced human sacrifice. Jewish women were war leaders, prophets, and led the world’s first democracy at a time when all countries in their region looked upon women as property.

None of the civilizations contemporaneous with Judaism exist today. How, then, did Jews and Judaism persevere after the Roman Empire burned Jerusalem and the Second Temple to the ground and enslaved almost half the Jews in Israel? Jews conceived several new tools for cultural survival while dispersed from England to China.

We argue that Paul of the Bible (Saul of Taurus) worked as a saboteur against the Roman Empire that Jews hated so vehemently. Paul molded early Christianity as an instrument to destroy the religious and cultural values of the Romans. Combining elements of Judaism and the cult of Mithra, Paul infiltrated the Roman Empire and over centuries Paul and his successors replaced the Roman pagan pantheon with Christianity as the Empire’s official religion.

Jews mandated literacy and numeracy for all male Jews at a time when the large majority of Christians were neither. Their literacy and numeracy gave Jews the means to study their religion and earn a living even in hostile societies. Rabbis, under threat of death from Roman Emperors, still wrote the Talmud, a library about 6,000 pages long. The Talmud contains the judicial reasoning, ethical rules, social arrangements, and necessary knowledge that prepared student rabbis for leadership in judicial decision-making, political guidance, and family, moral, and psychological counseling. Jews created the responda literature by which Jewish congregations thousands of miles and years of travel from a premier yeshiva could obtain rulings that kept Jews following the same religious views from Britain to China. Jewish businessmen invented much of early capitalism and international trade routes linking Europe, Africa, China and India.

In the centuries between Jesus and modern chemistry, most educated people considered alchemy the queen of sciences. Christians and Muslims viewed Jewish alchemists, and indeed the Hebrew language, as possessing secret and invaluable knowledge. Such views began at least c. 200 CE with Maria the Jewess, one of the first alchemists whose influence has been documented. For centuries, Christians and Muslims traveled thousands of miles to study under the best Jewish alchemists of the day.

Jews contributed disproportionately to the Islamic Golden Age. In addition to intellectual, literary and artistic creations, Jews achieved such trust among Muslim rulers that, for example, one Jew and his son served successively as the army commander of all Muslim armies in Spain and Portugal (al Andalus).

Everyone knows how the Muslim Arab armies swept through North Africa, Spain and Portugal. The Franks under Charles Martel, on the field of Tours, France, finally stopped this avalanche, which ebbed back south of the Pyrenees. The Battle of Tours in 732 CE saved western European Christendom from Islam. A simple glance at the map of Europe shows the other direction of Arab Muslim conquest: East. Iraq, Iran, fighting the Byzantine (Eastern Roman) Empire, and looping around the Empire to invade Eastern Europe, as the Ottoman Empire invaded Eastern Europe almost a thousand years later. However, what our history and we have lost are the Khazars. From the Black Sea to the Aral Sea, the Khazars, in a series of wars with Muslim Arabs from 642- 737 CE, stopped Islam, and prevented Eastern Europe from becoming part of the Caliphate.

Who were these Khazars? Khazars were a Turkic people, but an unusual Turkic people: blue-eyed, red-haired, and fair skinned. They wandered the vast steppes of Eurasia before settling around the northern part of the Black Sea. At the height of the Khazar Empire, about 950 CE, they ruled over land from eastern Ukraine to the Aral Sea and from the headwaters of the Don River to the Caucasus Mountains. The Byzantine Emperors viewed them as equal to the Pope and Charlemagne in importance.

The Khazar Empire was extraordinary in one other way: the state religion was Judaism. Khazars were religiously tolerant, but sometime between 740 CE and 800 CE (reports differ) the King and many of the nobility embraced Judaism. In the 800s, the Khazar king minted coins affirming that Moses is the true prophet of G-d. Beginning in the 840s CE Khazar kings built synagogues and Jewish schools. By 930 CE, Khazar nobility were found using Hebrew as their written language.

The Islamic Golden Age ended, followed by the terrible years when Jews in Christendom and the Caliphate faced increasing danger and persecution. The Edict of Expulsion in Spain, 1492 CE, represented a peak in persecution, as Ferdinand and Isabella of Spain ordered Jews and Muslims to convert to Christianity or leave their homeland in four months. Jewish families who had lived in Spain for a thousand years were uprooted and cast to the wind as refugees.

Jews responded to their expulsion in three very different ways. Some Jews enriched the Ottoman Empire and sailed as pirates or privateers against the Spanish and Portuguese. They helped the Dutch occupy Brazil and eject the Portuguese for 30 years. They aided England in conquering Jamaica from Spain and as spies warning England about the Spanish Armada. They helped to switch the center of commerce and wealth in Europe from Spain and Portugal in the early 1500s to Protestant England and Holland by the late 1600s.

Other Jews answered their co-religionists cries of anguish and disbelief by creating Lurianic Kabbalah, which is much of the Kabbalah studied today. These rabbis and scholars provided answers to Jews traumatized by their treatment and searching for such answers to make sense of their experiences. Finally, Jews migrated to the comparatively tolerant Poland- Lithuanian Commonwealth. Indeed, by the late 1600s about 80% of all Jews lived in the lands of the Commonwealth.

Lurianic Kabbalah affected both Jews and Christians. For example, two of the giants of the Scientific Revolution in the 1600s, Isaac Newton and Gottfried Liebniz, actively studied Kabbalah, Torah and the Talmud. In addition, both Newton and Liebniz were alchemists and spent much of their work life engaged in alchemy studies.

Judaism and the Hebrew language influenced most of colonial America, especially the Puritans. At Harvard and Yale University, commencement speakers were required to present part of their address in Hebrew. At Harvard, this requirement persisted into the 1800s. Just before the Revolutionary War, Loyalists spread a credible rumor that if America broke away from England, the rebel leadership would replace English with Hebrew as the national language. Although the rebels intended no such change, Hebrew and the Old Testament (Torah) exerted tremendous influence on the educated and religious classes.

The Freemason organizations offered Jews equality for the first time since Constantine established Christianity as the Roman Empire’s state religion (c. 325 CE). Jewish and gentile Freemasons worked actively to support the nascent United States of America. Freemasons, including Benjamin Franklin, started two revolutions (American & French) and gave Jews, for the first time, a form of legal protection not at the whim of some local kinglet, aristocrat, or ruler.