Marcia Nichols Your book, “Fire and Rain” had a far, far greater affect on me than you’ll ever know. I’m both grateful you wrote it and astounded at how ignorant I was of what it was like to have been there, lived it and somehow remained whole, if even in pieces. It’s inexplicable. 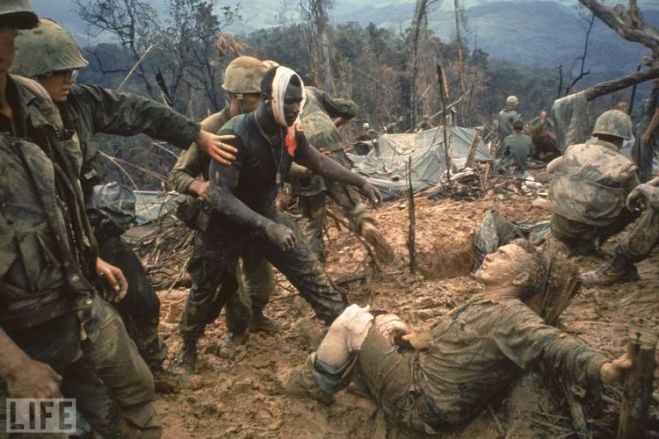 Destiny of Memories: Fire and Rain is in facebook

Please click on the link below to hear an interview with the Author.

A Destiny of memories Author Interview

5.0 out of 5 stars You want to know what combat veterans go through?
By Marshall Onellion Professor of Physics University of Wisconsin Madison on July 1, 2016
Format: Paperback
David Ramati has written a masterpiece. There, I have revealed my true reaction to “Destiny of Memories…”. Like many of our generation, David was patriotic and volunteered to join the Marine Corps right out of high school. He found himself in infantry combat in Vietnam, including bloody fighting and constant danger from everyone, men, women and children. If this sounds like what our younger military veterans have and are going through in Iraq, Afghanistan, the Philippines and elsewhere, it is. Constant danger, combined with high energy explosions and imminent violence, are bad enough. However, like many Vietnam veterans David had an additional stressor: the crap our country dished out to these poor guys when they returned to the USA. “Baby killer…war criminal…Nazi…” were among the greetings waiting for my fellow veterans ‘back home’. David writes with eloquence and pain how this affected him– and many thousands of others– who served their country honorably after being lied to by our political leaders. This book is not easy to read. It is stark, powerful, and at the level of “All Quiet on the Western Front” or “For Whom the Bell Tolls.” I found myself putting it down and taking breaks, because the language shoved me into graphic situations and wrenched my emotions. I recommend this without reservation.
Wayne Croning Writes:

A destiny of memories:  Book 1 Fire and Rain:

How do you describe a book that is gripping from the first moment you pick it up?  One has to actually read it first!   D. Ramati did a fabulous job of writing his own first- hand experience in Vietnam.  Proudly volunteering to join the Marines, he went to the killing fields of Vietnam at a very young age.  He describes in very real detail life in the jungles of Vietnam, fighting a war for what he truly believed in, Freedom!  Landing in the war zone, he soon realized that the war for freedom soon turned into a battle to survive.  Which he did.  But freedom has a cost and he lost many comrades in a fight that would never leave him.

On a short return back to the U.S. he was taken aback by the hostility faced by the countrymen he vowed to protect: The so-called Peace movement had turned hateful and he felt betrayed by the Country that he thought would support him all the way.  But his short return was more than that;  it was shocking news that awaited him on his arrival…

A must read and an eye opener to what really happened in Vietnam, the effect it had on all the young soldiers that gave their lives, gave their everything;  a war that people in general tend to  ignore and shrug off these days.   One sentence in the book really stuck out for me “ You can take the Marine out of Vietnam, but you can never take Vietnam out of the Marine.”

I am looking forward to reading part two.

5.0 out of 5 starsYou Can’t Handle the Truth

I have a vague recollection of the Vietnam war as I was very young. I remember the protests in America. I remember watching the film The Killing Fields. There was a song in the charts “19” about this war, the average age of a soldier back then. In a quiet English town, there was no conversation other than disgraceful war, unjust war. Then the Rambo movies started. There we saw a broken vet rejected by his own country.
I started reading this book with its every word carved out in pain, to takes to the very heart of the Vietnamese War. A man so broken and so dark, one wonders how he ever, stood up and returned to the war. He takes you through actual skirmishes without jargon, simply telling you how it is. The enemy sending out children with guns who killed you if you did not kill them first. To see a man beginning to scratch his way back into civilisation. The book ends with a letter left to him by Stella. The contents seem to be ominous. I look forward to Book 2 to see what the letter says.
Click below for More Book Reviews
More Book Reviews
ISRAEL DIARIES

This book is a true chronicle of what it is like to return home from war to a public that has no clue to who you are, what you feel, and how to accept you. I hope it will be of value to today’s vets who are returning. It is a long, lonely trail back to sanity.

Destiny of Memories: Fire and Rain: You could check out of Vietnam but you could never leave: Excerpt from the book: The year 1947 was also the same year that Al Capone died, the year that Jackie Robinson made history: Jackie Robinson changed everything for black Chicagoans and possibly set the stage for the struggle that lay ahead for his people. This was a year before the military integrated, seven years before Brown v. Board of Education, and eight years before Rosa Parks refused to step to the rear of a Montgomery bus.

Jackie Robinson wasn’t nudging people out of their comfort zones; he was shoving them with both hands. Some of his teammates initially refused to take the field with him, and among the Cubs as well, there was talk of a boycott.
He had served with blacks in Vietnam. Some were heroes, others were not, but all lived or died as United States Marines, and they were his brothers forever. The Marines only recognized one color: Marine Corps Green.

Now, twenty years after Robinson broke the mold, he sat in a window seat, still smelling of Vietnam. No amount of washings would ever get rid of the faint smell of death gunpowder and napalm, which was both a physical and spiritual stench. It was unusual for a Marine to be going home out of uniform, and under normal circumstance, he would be in a freshly pressed uniform, but the emergency orders that had pulled him out of the ‘Nam left no time for spit and polish. He had a short layover in Seattle where he had managed a hasty change from his jungle utilities, to ill-fitting jeans and a short-sleeved shirt too large for his shrunken frame.

Those battered jungle utilities had been more a part of him than was the city below with its sleeping hundreds of thousands; a city both unaware and uncaring that yet another Marine was coming back from hell.

They would return from Vietnam, but unfortunately, the memories would stay with them forever: You could take the marine from Vietnam but could never take Vietnam out of the marine. No one ever came back…

Now, twenty years after Robinson broke the mold, he sat in a window seat, still smelling of Vietnam. No amount of washings would ever get rid of the faint smell of death, gunpowder, and napalm, which was both a physical and spiritual stench. It was unusual for a Marine to be going home in ill-fitting civilian dress, and under normal circumstance, he would be in a freshly pressed uniform, but the emergency orders that had pulled him out of the ‘Nam left no time for spit and polish. He had a short layover in Seattle where a good Samaritan had given him some extra clothing which allowed him to  change from his jungle utilities, to ill-fitting jeans and a short-sleeved shirt too large for his shrunken frame. Those battered jungle utilities had been more a part of him than was the city below with its sleeping hundreds of thousands; a city both unaware and uncaring that yet another Marine was coming back from hell. The “lucky ones” would return, but unfortunately, the memories of Vietnam would stay with them forever.

For more hours than he could count, he had been fighting to stay awake, but kept drowsing into a limbo, which was both part dream and also part memory. He dozed for a moment and then snapped awake as he felt cold waves of fear fueling his body with a rush of adrenalin; causing him to react automatically with the instincts developed in Vietnam …instantly wary and alert. He had learned on patrol to be suspicious of anything different; anything even slightly out of place and here, in “The World”, everything was out of place, and his fear and caution made him as dangerous as he would be on patrol.

He felt naked without his rifle. How could he defend himself? The adrenaline rushes continued, and after each attack subsided, he clung to the reality that he was home now. This was the United States. He was back in “The World”. There were no enemies here. Nevertheless, even here, a part of his mind and soul remained in Vietnam, ten thousand miles away, where even in the insanity of war, there yet remained a familiarity of belonging to something that he desperately refused to let go. Only now, he realized for the first time what his old gunnery sergeant had told him was stark truth and reality; ‘you can take the Marine out of Vietnam, but you can never take Vietnam out of the Marine’.

As he saw his reflection in the port window, the memories reached out and held him like a jealous lover until his reflection dissolved into other scenes, and he closed his eyes and slipped back into the familiar and brutally beautiful landscapes of Vietnam.

Available for sale online at Amazon

21 thoughts on “Destiny of Memories: Fire and Rain”